Stamps of the World

From Stamps of the World 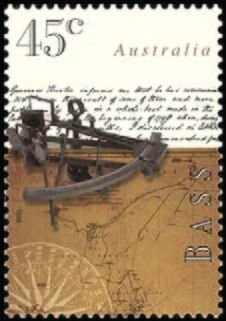 This issue highlights the Bicentenary of the circumnavigation of Van Dieman's Land (now called Tasmania), by George Bass & Matthew Flinders. They both arrived in New South Wales on the HMS Reliance in September 1795 and immediately began charting and exploring the coastline. On 7 October 1798 they left Port Jackson on board the Norfolk to explore Van Dieman's Land. The brig Nautilus accompanied them as it was on it's way to Cape Barren Island. After circumnavigating Van Dieman's Land they arrived back at Port Jackson on 12 January 1799.

The George Bass stamp features an excerpt from a letter he wrote to Sir Joseph Banks in 1799, detailing his finding Bass Strait along with Finders' sextant and a map detailing the separation of Tasmania from the mainland.

The Matthew Flinders stamp features the map, an excerpt from the narrative of the exploration undertaken in the Norfolk, and Flinders' telescope.

The se-tenant pair are integrated with a traditional compass image.

The first day of issue postmark was Navigators VIC 3352.