From Stamps of the World 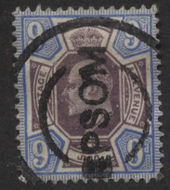 The following error has been detected in your syntax:
* Parameter coordinates must be one or more valid locations.

Epsom lies within the Copthorne hundred used for periodic, strategic meetings of the wealthy and powerful in Anglo Saxon England, and later having a Hundred Court. The name of Epsom is early recorded as forms of Ebba's ham (home or perhaps manor). Ebba was a Saxon landowner. Many Spring line settlements by springs in Anglo-Saxon England were founded at the foot of dry valleys such as here and Effingham, Bookham, Cheam, Sutton, Carshalton, Croydon and Bromley. A relic from this period is a 7th-century brooch found in Epsom and now in the British Museum.

Chertsey Abbey, whose ownership of the main manor of Ebbisham was confirmed by King Athelstan in 933, asserted during its Middle Ages existence that Frithwald and Bishop Erkenwald granted it 20 mansas of land in Epsom in 727. Epsom appears in Domesday Book of 1086 as Evesham, held by Chertsey Abbey. Its domesday assets were: 11 hides; 2 churches, 2 mills worth 10 shillings, 18 ploughs, 24 acres (97,000 m2) of meadow, woodland worth 20 hogs; altogether it rendered £17 per year to its overlords.[3] The town at the time of Domesday Book had 38 households (and 6 serfs noteworthy enough to be recorded as assets), some of them in a nucleated village near the parish church of which there were two.[4] At various dates in the Middle Ages manors were founded by subinfeudation at Epsom Court, Horton, Woodcote, Brettgrave and Langley Vale.

Retrieved from "http://www.stampsoftheworld.co.uk/w/index.php?title=Epsom_(GB)&oldid=445255"
Category:
Stamps of the World